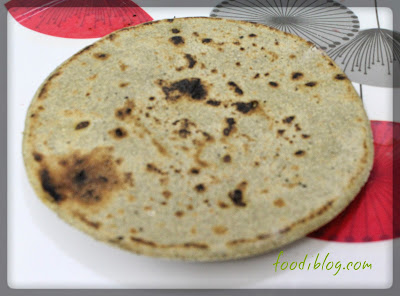 Bajra na Rotla or Millet Flour Roti is widely consumed in Western part of India. Gujaratis, Parsis and Maharashtrians regularly add Bajra na rotla as a part of the meal.

I still remember one of our neighbours used to eat Bajra na Rotla and Milk daily evening. It was a fixed menu of that home. To make bajra na rotla you should use “Thapo” method which is described in below recipe.

1. Divide flour into 2 portions. Mix one portion with quarter teaspoon salt and enough water to bind. Knead well with your palm.
2. Dust hand with flour and shape into a large flat cake about quarter-inch thick, pressing and turning it on a board. (This method is called “Thapo” in Gujarati)
3. Cook gently on a hot tava, till done, turning once only.
4. Spread with ghee or butter if desired.
5. Repeat with second portion of flour.

Tip:
Knead only one roti recipe at a time.