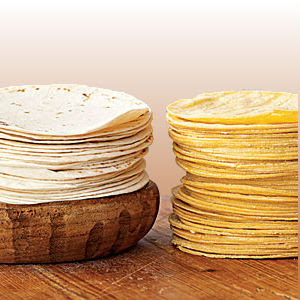 This is a quick and easy Mexican Tortillas and Tortilla Chips Recipe.

Mexico’s everyday bread, the unleavened tortilla is round and flat — it resembles a very thin pancake. The hand-shaped tortilla can be made from corn flour (masa) or wheat flour, but is always baked on a griddle (comal). It can be eaten plain or wrapped around various fillings. Tortillas are the base for burritos, tacos and a multitude of other dishes. Both corn and flour tortillas are sold prepackaged in the refrigerator section of most supermarkets. In Spain, the word tortilla refers to a thin omelet, the traditional version of which contains potatoes and Spanish onions. Other ingredients that may be used include ham, chorizo and peppers.

1.Mix the flours, oil and salt and make a dough by adding enough warm water.
2.Knead the dough well and keep or 1/2 hour. Knead again.
3.Depending on the diameter you require for the dish, roll out the dough into 6″ (150 mm.) or ” (225 mm.) diameter thin rounds with the help of a little flour.
4.Cook lightly on a tava (griddle) and keep aside.

Tip:
1.Make large quantities and freeze in a refrigerator, as tortillas are used extensively in Mexican food.
2.They should be present at every Mexican Meal, served warm.
3.And stacked within a warm white cloth and then placed inside a colourful straw basket.

How to Make Baked Tortillas: 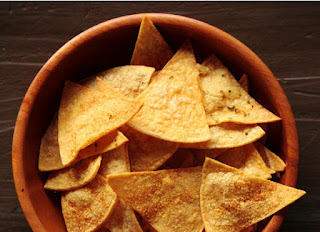 1. Brush both sides of the tortillas with the oil.
2. Stack the tortillas and cut the pile into sixths to make chips.
3. Spread the chips out in a single layer on two large baking sheets and season with salt.
4. Bake until golden brown and crisp, rotating the baking sheets once, about 12 to 15 minutes.
5. Serve with Mexican Sauce.