No Result
View All Result
Home Curries and Gravies

by Khyati
in Curries and Gravies, Mix-Vegetable-Curries, video-recipes
386 12
1
372
SHARES
2.8k
VIEWS
Share on FacebookPin on Pinterest
Jump to Recipe·Print Recipe

Potatoes, whether mashed, baked, fried or roasted, are often essential comfort food in most cuisines. Potatoes are believed to have been domesticated around 7,000 -10,000 years ago near modern day Peru, South America. Today, nearly a third of the world’s production is harvested in India.

So how did the Potato reach India? The Portuguese introduced potatoes to india (they called it ‘Batata’) in the early seventeenth century when they cultivated it along the western coast of India. The British traders introduced potatoes in Bengal as a root crop, ‘Alu’. By the end of eighteenth century, it was cultivated across the northern hilly areas of India. And so this amazing ingredient was born in India and dishes made of potatoes spread to each and every corner of the country.

One such dish is the Dum Aloo, which has numerous variations in our country. This dish is prepared differently in each corner of India, according to taste, spices and cooking styles of the region. I have another version of this recipe which is Jain versiona and I call it as Bhojpuri Dum Aloo recipe.

Some of the other recipes like Paneer Makhanwala, Malai Bhindi Masala Recipe or Kadai Paneer can also be considered if you are looking forward to try some restaurant style recipes. 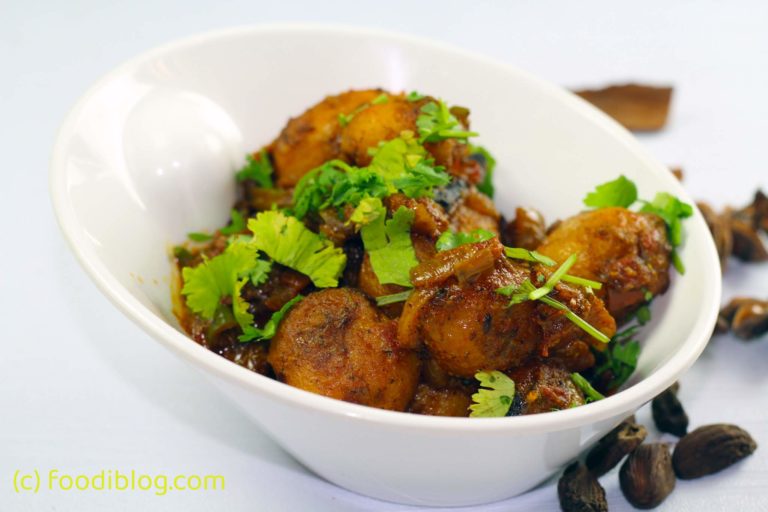