No Result
View All Result
Home Rotis and Breads

This dish Cabbage paratha is stuffed with less calories, full of taste and some surprise ingredients. Cabbage parathas can easily cooked under 15 minutes in a usual day (if you do some preparation well in advance). The only time consuming step in cabbage paratha is Squeezing out water from the cabbage. Apart from this, cabbage parathas are rich in Vitamin C obtained from cabbage which is super hero of this dish. My wife is Health savvy and she loves it very much, this recipe is her recipe. I am just taking privilege to share it with all of you.

Talking about history of Parathas, it is the most popular flatbreads in the Indian Subcontinent, made by baking or cooking whole wheat dough on a tava, and finishing off with shallow frying. Parathas are thicker and more substantial than chapatis/rotis and this is either because, in the case of a plain paratha, they have been layered by coating with ghee or oil and folding repeatedly using a laminated dough technique; or else because food ingredients such as mixed vegetables have been mixed in with the dough, such as potato or cauliflower, cabbage, green beans, and carrots.

Discovered (or rather invented) quite easily, actually. The existence of the Indian stuffed paratha as we know it today goes back to somewhere in the early medieval period, well before the 12th century CE in fact. The parathas, when first invented, were usually sweet though. Similar stuffed sweet dishes, although of different shapes and sizes, were popular since the early centuries of the first millennium CE, and so a stuffed flatbread wouldn’t have been too difficult to imagine. After all, the plain wheat-flour flatbread (roti, chapati) was a staple.

Parathas can be eaten as a breakfast dish or as a tea-time (tiffin) snack. The flour used in Cabbage paratha is (atta) and the dough is shallow fried with minimum oil.

Perhaps the most common stuffing for parathas is mashed, spiced potatoes (aloo ka parantha). But in this dish I tried to give it a healthy twist by using Cabbage, Coriander, Green chillies and Ginger. To make it tangy and tasty, we added Aamchur powder. 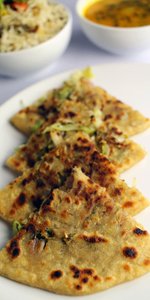 This dish Cabbage paratha is stuffed with less calories, full of taste and some surprise ingredients 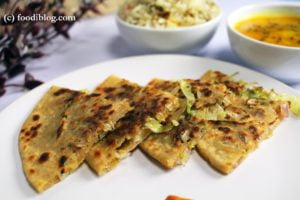