Vivid platters in Hyderabad for Eid this year 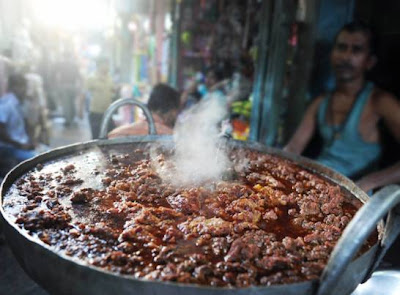 Biryanis, kormas, kebabs and niharis…Muslims in Hyderabad are gearing up to cook mouth-watering delicacies as the city celebrates the festival of Eid-ul-Azha today.

Popular dishes like achari gosht, mutton stew, fried kaleji (liver) and tandoori raan (grilled lamb thigh) are prepared in homes and restaurants in the old quarters of the city and are the most sought after. I am a pure Vegetarian but still smell and flavors of these delicacies attract me.

Baby Corn : What are they? How To Use Them?

What is Curry? Is it a Indian Word?

“The celebrations are spread over a period of three days, Eid is the first day followed by basi and tibasi. The sacrificing of animals and preparations of delicacies continue throughout,” said Anas Ahmed, a resident of Daryaganj in the city’s old quarters.

Muslims across the globe celebrate Eid-ul-Azha in honour of Prophet Ibrahim, who was willing to sacrifice his son Ismail to please Allah. According to Muslim belief, Allah replaced Ismail with a sheep just as Ibrahim was about to sacrifice him. Hence, the tradition of sacrificing an animal.

Meanwhile, the liver of the sacrificed lamb or goat is one of the most simple yet sought after delicacies as many believe that it strengthens the immune system.

“As soon as the lamb is slain the liver is taken out. It is then chopped, fried and sprinkled with spices and consumed immediately as it’s very energetic,” Khalid Khan, one of my friend out there in Hyderabad shared this rituals with me.

Dry and curry platters, especially of mutton, are prepared in homes while some must-have specialties like the tandoori raan are best enjoyed outdoors.

The raan is marinated overnight and then roasted in a tandoor (oven). As most of the households don’t have a tandoor, it’s better to go out and savour it at the various restaurants.

Another delectable appetizer is the seekh kebab made of camel meat. However, as not many sacrifice the animal because of space and financial constraints, it remains a rare delicacy.

Camel meat is quite juicy and tender. It is much better then goat meat. However, there’s only one condition, that you have to eat it piping hot, otherwise you won’t be able to savour the flavours.

And after the main course, come the lip-smacking sweet sevaiyan and kheer, topped up with generous amounts of dry fruits for added flavour.

Recipe for achari gosht (As told by my friend):

In a pan, whisk plain yogurt and a litre of water. In a separate pan, heat some oil and add ginger, garlic and onion paste, cloves, mustard seeds, cumin seeds, fenugreek seeds and stir fry for around 15 minutes.

Recipe for mutton stew (As shared by one of my Restaurant Chef friend:
In a heavy pot, heat six tablespoons of oil, add chopped onions and saute till they turn golden brown. Add mutton chunks while stirring constantly.

Now add lots of water to tenderise the meat. Cover the pot and let the meat cook on low heat until it is soft.

Baby Corn : What are they? How To Use Them?

What is Curry? Is it a Indian Word?