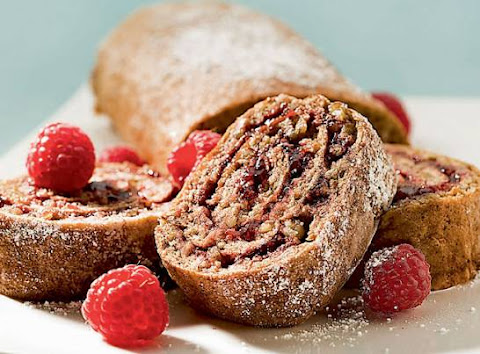 Jam Roly-poly is traditionally steamed. So before proceeding further to Jam Roly-poly recipe I would like to advice you that if you have a large enough steamer you can use that.

Now lets imagine how often did we fantasise about the food while reading Enid Blyton’s descriptions of English high tea and dinners when we were kids.

Images of buttered scones and jam roly-polys would dance in front of our eyes as kids, though few of us had any idea what they were and were only sure that they would be delicious.

In this post lets have a look at a recipe that we have always fantasised about as kids.

Unfortunately, you will never find this dessert on any Indian restaurant menu, but that doesn’t mean that Jam Roly-Poly aren’t delicious.

1. Preheat the oven to 200o C.
2. Sift the flour with the baking powder in a large bowl and stir in the butter.
3. Make a well in the centre of the mixture.
4. Add half cup water and mix till the mixture starts coming together.
5. Make a ball out of the sticky dough.
6. Place it on a lightly floured sheet of baking paper.
7. Roll the dough out into a rough rectangle (26×20 cm) between two sheets of baking paper.
8. Now spread the jam on the dough leaving a 2 cm gap on the shorter sides.
9. Roll up the dough starting from the shorter side.
10. Place the roll, along with the baking paper on a baking tray and roll the baking paper up to cover the dough, twisting the sides.
11. Bake for 30 minutes or until golden brown.
12. Allow the roly poly to cool down completely before slicing it.
13. Serve with custard.
Previous Post